We sat out the storm in the ghost village and launched again after a hearty breakfast. The finish line of the trip was merely 7 kilometers away.

Uuanortoq is the perfect place to finish any kayak expedition. The island is known  for its thermal hot springs and natural pools.  They are ideal for getting clean after a solid week of sweating in a plastic suit.

The thermal water just sucked us in. Our options were limited: getting out of the water in the freezing wind or enjoying the soft bubbles and womb like warm water.  After spending a shamefully long time submerged we decided it was time to man up, endure the windchill and kayak north to the area’s most prominent Viking ruins.

Heading north towards the Viking ruins.

Can you spot the Viking ruin?

We set up camp in an abandoned sheep farm next to the alleged Viking ruins. The afternoon was full of excitement and activity. After guessing the layout of the Viking village, we stumbled upon an Inuit burial site complete with human bones. Later we talked Beni out of setting the abandoned barn on fire, played Greenland’s favorite game show: “Snowmobile Or Jetski.” and read every mid-80s Danish gossip magazine we could find in the farm house.  Did you know Benny Hill’s real name was Alfred? 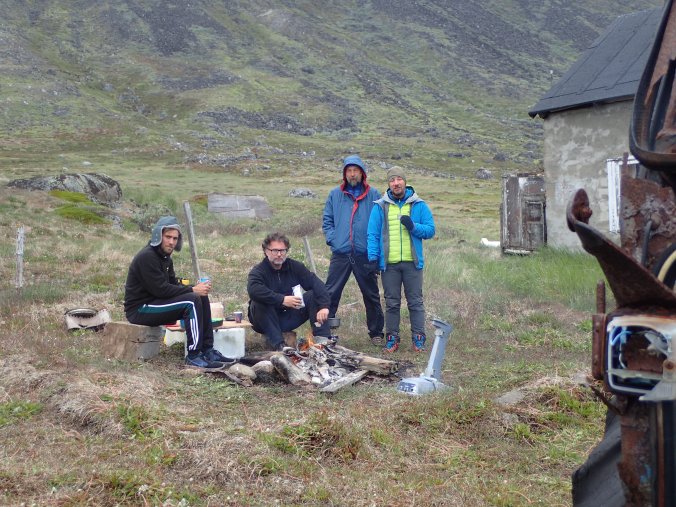 Looks like the movie set from a Siberian airline disaster movie. “Group of survivors found new life on the frozen tundra.”

The next day we kayaked back to Uunaortoq. Beni chipped off a piece of an iceberg and took it back to the hot spring. We spent the better half of the day drinking whiskey on the rocks and lounging in the 40 degree puddle.

It’s hard to imagine a happier ending to an epic kayak trip in Greenland.

That one will be perfect for the whiskey.

A mellow afternoon of boozing and soaking in Uuanortoq.