After two days of intense kayaking among the fjords, we reached the town of Alluitsup Paa (Danish: Sydprøven). AP is the kind of place that politicians refer to as having negative population growth, while everyone else just calls the phenomena, “sh*t, the village is dying”. 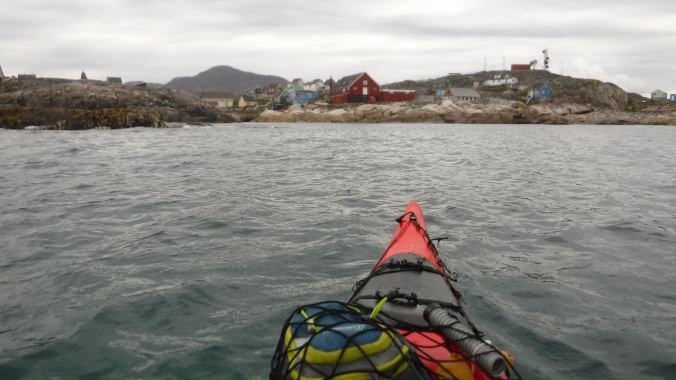 The first thing you notice as you sail into Alluitsup Paa is the cellphone tower and the government monopoly supermarket, Pilersuisoq.

Ten years ago 360 people lived here. Today less than 75 souls make up this tiny seaside hamlet. After cod “mysteriously disappeared”, people lost their livelihoods, the school closed and many moved to other parts of the country. This sad story is echoed in coastal communities around the world from Greenland to Belize and Ghana. One doesn’t need to be a climate scientists to know that rising ocean temperatures, climate change related new wind and precipitation models combined with industrial overfishing are the culprits behind the mystery.

Amid the decay, Sydproven still has a hotel. The proprietress of the Seaside Whale Hotel looked absolutely terrified when Beni and I showed up. We couldn’t decide what caused the mortified look on her face. Was it that our dry suits and mosquito masks made us look like space aliens or the fact that she hasn’t seen paying guests in years?

Out of mercy, we decided that terrorizing her by being there was not a good idea. We pitched our tents on a rock by the harbor, right behind the town’s supermarket. 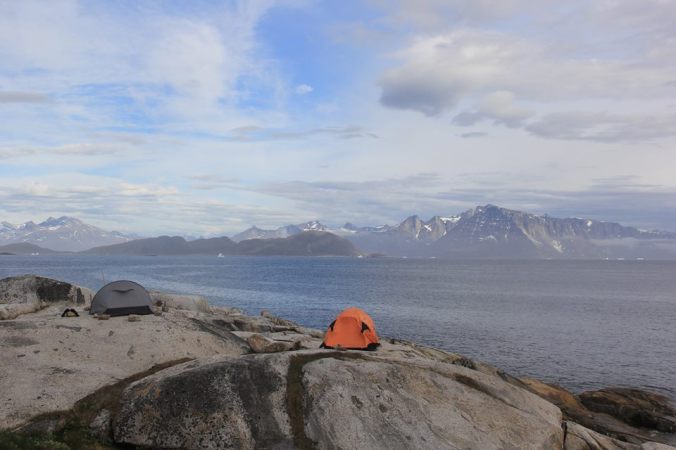 The best view in town. Camping on a rock.

Peter and Andras found a quiet nook next to the marine gas station complete with picnic tables.

Later that evening we ventured back to the hotel since it was only place in town to get a drink. We freaked her out again, but this time she has grown somewhat accustomed to our presence. The fear and terror have subsided in here eyes. She told us about all the neighboring villages that have been abandoned years ago, the whales that are expected to return in August and went on to sell us 4 beers for a tiny fortune.

After a cold and windy night, we woke to the smell of freshly baked croissants and danishes permeating from the little store’s bakery. It seemed like a fantastic day to kayak.

World War II US military pilots had trouble identifying Greenlandic towns with their long names full of p’s and q’s. So every settlement got a letter and a number. Alluitsupp Paa became A23. Signs on rooftops are still clearly visible from the sky. 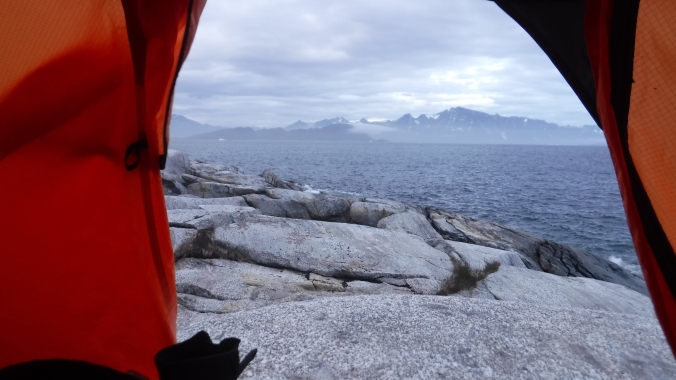 The view at 11PM from my tent.